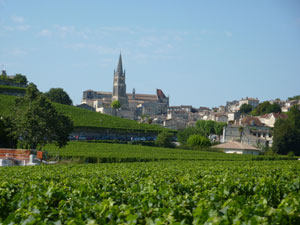 One of the least populated areas of western Europe, Gascony is famed for its douceur de vivre (sweetness of life), its food , its medieval towns and villages, its sunny weather and the beauty of its countryside. Gascony is the land of d'Artagnan, who inspired Alexandre Dumas's character in The Three Musketeers, and home to the eponymous hero of the play Cyrano de Bergerac. Before and during much of the 100 years war (1337-1453), Gascony was under the control of the English Plantagenets who were fighting with the French House of Valois over claim to the French throne. Much of the architecture of that period remains today, including many bastides, the fortified villages that proliferate in the region. At the end of the war Gascony reverted to French control but the ties with England remained strong not least in the trading of wine. In fact the volume of wine shipped from Bordeaux to Britain today has only just surpassed that of the 14th century. 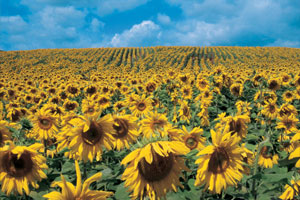 Lot-et-Garonne is one of the original 83 departments created after the French Revolution in 1790 and was previously part of the old provinces of Guyenne and Gascogne. Located between the Lot and Garonne rivers, this is a green and rolling landscape, described by the writer Stendhal as “the Tuscany of France,” or as Sam Taylor put it in an article for The Guardian newsaper, “A blessed little corner of south-west France made up of gently rolling hills, fields of corn and sunflowers, winding roads empty of cars and pretty little towns and villages, where people always have time to talk to you. It's like an unspoilt Tuscany or Provence and I'd better shut up now or I'll be responsible for spoiling it.” http://www.europa47.org 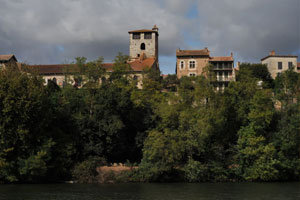 Clairac, our local village, is a bastide founded in 1281 by Edward I, King of England (the great grandson of Eleanor of Aquitaine) and by the Abbot of Clairac Abbey. The Order at Clairac was Benedictine and the Abbot was traditionally appointed by the Pope.

In the 12th century, the Clairac monks crossed a damson tree brought back from Syria by the Crusaders with a local plum, thus creating a new variety which they called the Ente plum, from the old French verb “enter”, meaning “to graft”. The Clairac monks were also the first to realise that the fruit could be preserved for a whole year after being dried in the sun. Hence Pruneaux d'Agen should correctly be called “Pruneaux de Clairac”!

Despite its Catholic heritage, Clairac was an active centre in spreading the Protestant faith after 1530 and was repeatedly attacked by Catholic armies. Following a siege in 1621, led by Louis XIII himself, the city walls were razed to the ground and the Protestant population put to the sword.

In the 18th century, Clairac was one of the main harbours in the lower Lot valley and was the first place in Europe to grow tobacco. Many of the barns in the area, including our own, were originally tobacco drying barns.

Today, as always, Clairac is at the heart of local agriculture. The Lot valley is a rich fertile flood plain supporting a wide range of produce including the ubiquitous fruit trees, strawberries, corn and sunflowers.

Thanks from me and my friends for a wonderful week at La Bique.